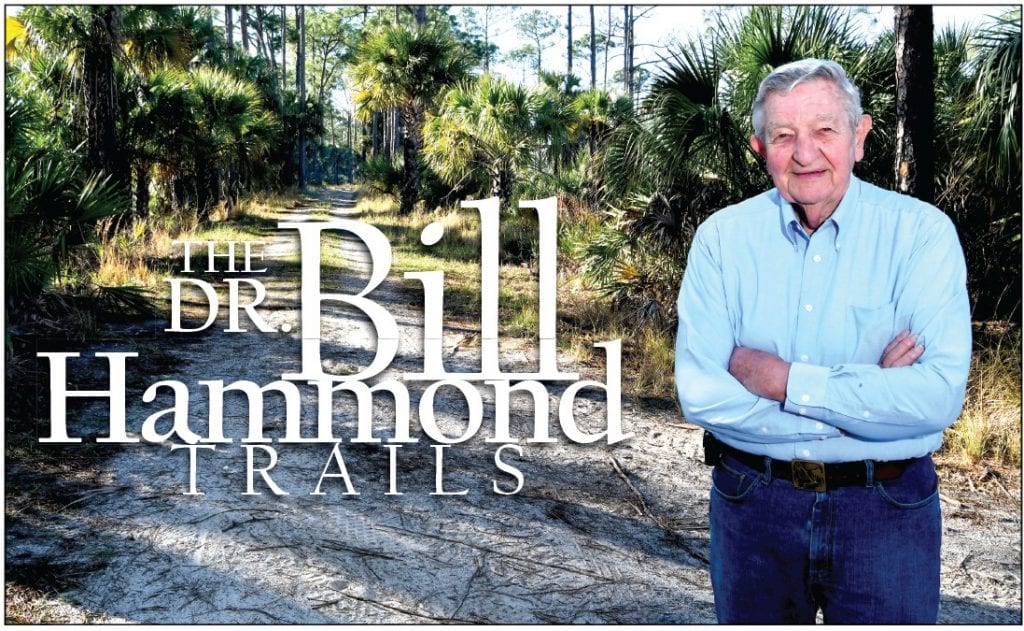 One of the first principles of life at Babcock Ranch is this: Nothing is disconnected. Put another way, everything — each neighborhood, all roads, trails, parks and lakes, the town and villages in the 18,000-acre Babcock Ranch community, the 73,000- acre state preserve out of which the neighborhoods grow — is connected.

So is the past connected to the present and future. For that reason, the new Dr. Bill Hammond Trails, set to open formally on January 25, carries the name of the “green architect,” Bill Hammond.

The celebrated ecologist and educator, who sat on the governing board of the South Florida Water Management District in the 1990s, was driving north on I-75 one day about 15 years ago when he got a call from Babcock Ranch visionary and founder Syd Kit-son, president and CEO of Kitson & Partners, who was driving south. At the time, Mr. Hammond, now 81, was an assistant professor of ecological and marine sciences at Florida Gulf Coast University. As such, he was famous for taking students into the waist-high waters of a cypress slough, on foot, to help them understand the water-world of the western Everglades — not just through textbooks, but through their senses. He was also the recipient of numerous regional and national awards, including the Congressional Theodore Roosevelt Award for conservation service to the nation, and the Urban Land Institute’s Pathfinder Award in Southwest Florida. 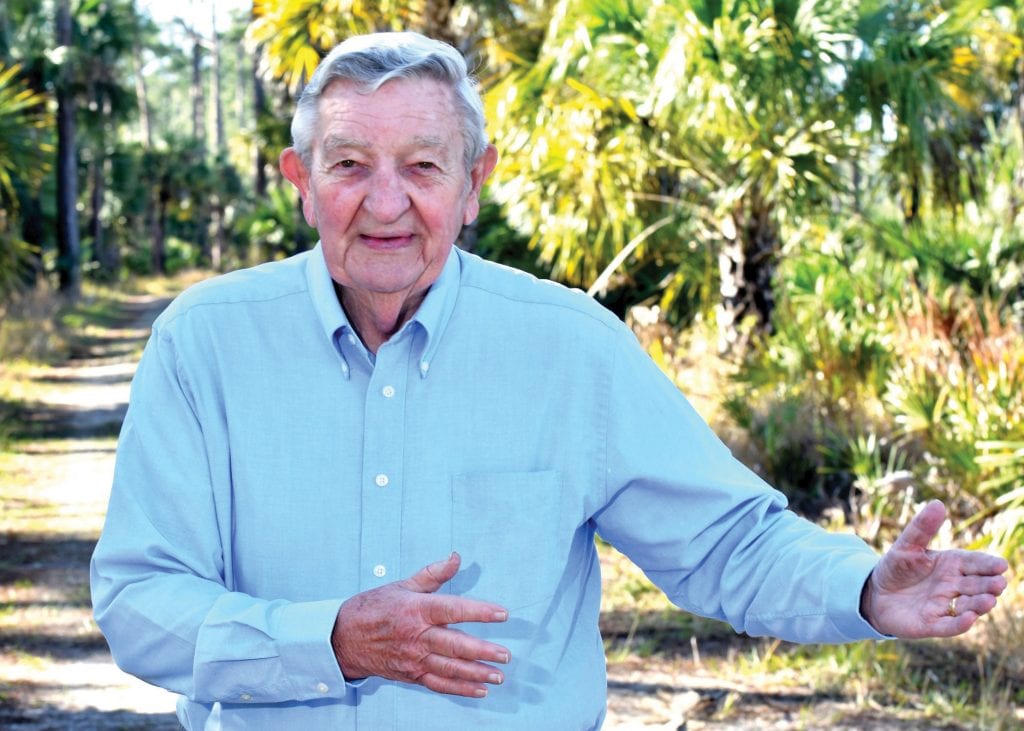 In his days as a professor at FGCU, Bill Hammond helped his students understand the water-world of the western Everglades. CHRIS TILLEY / BABCOCK RANCH TELEGRAPH

He and Mr. Kitson agreed to meet for lunch in a Cracker Barrel just off the interstate to talk about Mr. Kitson’s green plan for developing Babcock Ranch.

Dr. Hammond was skeptical. Most developers weren’t interested in “green,” nor did they understand even the most rudimentary notions of hydrology, he said — they didn’t see it as a way to do good by doing well.

“But we stayed through dinner and we closed the place down,” he recalled of their long conversation about water, the environment and how to manage and protect them both for what would someday be one of the greenest, cleanest towns in Florida — indeed, in the country.

That’s where “the signature trail for all the urban-area trails” at Babcock Ranch was born as an idea. The first 4.2 miles open this month; eventually the trail will extend along Curry Canal from Curry Lake (another name soaked in history) to State Road 78 in Lee County on the southern border of the vast Babcock Ranch Preserve, paralleling the Caloosahatchee River.

When Mr. Kitson wanted to hire him, Dr. Hammond told the developer he wouldn’t work for money. “Instead, I wanted access to him anytime I needed it, and I wanted meetings where I could suggest any ideas I had,” he said.

Over time and with others, “I had the privilege of laying out almost 40 miles of trail — bridle paths, off-road bike paths, cross-country hiking trails, nature trails and urban trails,” Dr. Hammond said. Some are paved, some are gravel and others are grated dirt.

The main trail that bears his name “connects all the villages together,” he said. “It has flexibility and is as low-impact as we could make it.”

They distinguished the various recreational uses so off-road bicyclists, for example, wouldn’t interfere with equestrians. The huge market Mr. Kitson and Dr. Hammond were betting on with that approach weren’t well-defined at first, but it was out there waiting to be.

“The whole idea, the ethic of trying to preserve the ranch, was to attract people who wanted to live next to a 73,000-acre preserve where 18,000 acres is urban but half of that is also preserved, and all water flow-ways articulate with other systems,” Dr. Hammond said. “So it’s a community of integrated systems and not merely a development surrounded by green space.”

The connection to history goes back even farther than that meeting at the Cracker Barrel on I-75.

Mr. Kitson and the early Babcock Ranch team could not have done any of what they did had the U.S. Army Corps of Engineers not built Curry Canal in the mid-20th century, in response to Bill Curry, original ranch owner Fred Babcock’s son-in-law, wrestling year-round with water on the landscape that hindered irrigation for farming and flooded cattle land.

One Lee County citrus farmer who grew up on the Lee-Charlotte county border in the 1940s and ’50s came from a family that ran cows up into Babcock Ranch, Dr. Hammond recalled. That man was Jim English.

“He told me his dad would send them up into Babcock to round up cattle when he was young and they’d be chest-deep in water,” Dr. Hammond said.

The water flowed south across Charlotte County into Lee County and the Caloosahatchee River — overland as sheet flow and also through a series of natural tributaries: Owl Creek, Trout Creek, Fitcher’s Creek, some others “and the big one coming out of Telegraph Swamp — Telegraph Creek,” Dr. Hammond explained.

“Curry couldn’t get enough water to flow out of it, so they dug a Telegraph canal (a.k.a., Curry Canal) to bypass part of the creek and get the water down quicker. That whole engineering effort was aimed at drying out the south end of the ranch.”

The original engineers were able to put in a weir system. Mr. Hammond added to it in the master design for Babcock Ranch, which anticipates a remarkable geological feature: a downhill slope to the Lee County line where the landscape drops almost 30 feet, the biggest elevation change in Southwest Florida and one essential to the environmental character of Lee County.

In the original water-control efforts and with the digging of Curry Canal, so much fill was used to create raised banks that the landscape became ideal — ideal for the trails Mr. Kitson and Mr. Hammond envisioned and began building for the community.

But no dirt was turned, acknowledged Dr. Hammond, before Mr. Kitson spent more than $1 million on hydrological studies.

“He hired hydrologist Greg Rawl, who put together a world-class team that created a several 3-D hydro models to help us figure out how we could maintain and restore water without damaging the environment,” said Mr. Hammond, who suggested putting in three more weirs so we could stage the water and keep it in until it was time to flow down.”

Which means the canal has the characteristics of a stream, flowing into Trout Creek, which in turn flows into the Caloosahatchee River.

For those who use and get to know Dr. Bill Hammond Trails, history and the complex, well-conceived vision of the man himself will become living connections and companionable friends.

Mr. Kitson puts the connection this way: “After more than five decades as Southwest Florida’s premier environmental educator, Bill Hammond’s decision to go to work for a developer took many by surprise. But residents of Babcock Ranch will reap the benefits of that decision for generations to come. His fingerprints are everywhere. From native landscape requirements, filter marshes and rain gardens to expansive parks, greenways and trails, Bill Hammond’s guiding hand on all environmental and sustainability initiatives here have helped make Babcock Ranch a model for responsible growth.”